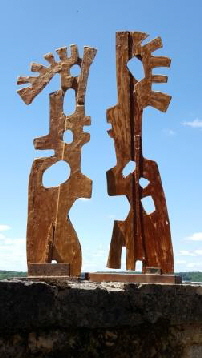 This year, 2018 it is thirty years ago I graduated. It is impossible to capture and solidify those 30 years into an image. But it is possible to place a marker in the time and establish what of interest is preserved in thirty years. With “the space between us,” I have given form to this moment with an image that fits clearly in the "now" of my work, but also harks back to the time and the development that brought me here. Material, form and theme all have their own meaning.

‘The space between us' consists of two forms which are placed in a such a position that the space between the two elements is just as important as the elements themselves. That gap get's it's own form, as long as the two parts remain related to each other in the proper tension. Something more remote, something less, but within the boundaries of the field of tension arises that third form, that perhaps may be namen as: WE.You and I = we, 1+1=3. The whole is more than the sum of its parts.
The material:  Bronze, brought me the invulnerable translation of my fragile and ephemeral work. Paper, wood , cardboard, it can be ‘immortalized’ when casted in bronze. This material gave me the feeling ( the illusion?) of having an answer on the influence of time.

The form: Is it flat or is it spatial? Is the two-or three-dimensional? This question can always be asked in  my work. They’re thin statues set up in space. In the course of time, it happens more often that the sculptures appear as a duo. Identical, but more often as two different communicating images

The interpretation: The dichotomy can be interpreted in different ways: Duality, dialogue, partnership and interaction. For each observer this interpretation is different. For me, it is the story of two people who live together, in such a way that the togetherness itself gets a private identity: a form of independence of its own. It becomes the ‘third person’

The Space between us’ is 75 cm high and 25 cm wide and 0,6 to 0,7 cm deep.
It will be cast in bronze and issued in an edition up to a maximum of 15 pieces
The price : 3400,00 euro incl 6% vat and placement on natural stone. At the opening of the jubilee exhibition in the former synagogue in Kampen , September 29 2018, the first copie will be shown. Top right a picture of the wax and wood version.